Some time ago while going through some files, I came across an old negative that brought back memories. It was a close-up of a flower taken with an old folding roll film camera we had around the house. I was 15 years old with no budget for equipment but I had a library book showing the elemental design of a camera. I discovered that I could make a ground glass by removing the film and taping a piece of tissue paper across the film plane. I found an old pair of eyeglass lenses, which I used to make a close-up lens, and held them in place with scotch tape. I carefully measured the distance from the lens to the focus point, removed the tissue paper, loaded a fresh roll of film, and shot the entire roll at the same 5 inch distance. 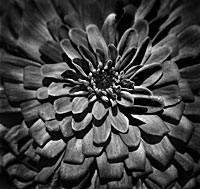 Over the years my equipment has gotten better. When I signed on with the Geographic, I was told I could have anything within reason and one thing not within reason. I was using Leica cameras at the Toledo Blade newspaper where I had been working and wanted to continue with them. Bud Wisherd, who was in charge of the equipment at that time, gave me a Nikon F which he suggested I try. I took it and used it primarily for close-ups and extra long lens shots. Eventually I had two systems. Nikons got better. I vividly recall a row of engineers from Nikon sitting and taking notes about what we liked and didn't like about their cameras. We'd make a comment such as "the rewind lever is too sharp and cuts our finger." A year later, the new model came out with a broader rewind lever with the end covered with plastic. The engineers would be back and would ask, "Here is our new camera, how you like it?" And year after year, the cameras would improve. Nikon's competitors brought their new models too but with the attitude, "Here is our new camera, you will like it."

Eventually, I switched to Nikon and use them for virtually all my work. Currently I'm using a D2x and a D200 as my primary workhorse cameras. I have a battery of other equipment for specialized work. I consider these tools and select the best one for the job. These include ProSumer Panasonic cameras, conventional Nikons, Leicas, and a Linhof Super Technica. Slowly I'm getting rid of my film cameras. I sold my 6x7 gear and got rid of my Fujiwide because I feel I can do it better with digital.

I used a Nikonos with a 15mm lens to produce an underwater panorama in 2005 (you can see it in my "events" section). The next day I flooded that camera by accident and have not shot film since. I prefer prime lenses and suggest it's often faster to back up a few steps to get a wider view or to step closer a few steps to get closer view. However, Nikons' 70-200 f 2.8 VR lens is spectacular and more and more I depend on my other Nikon zoom lenses. Other Nikon lenses in my collection range from 10.5 to 500mm. I record my images on Lexar compact flash and SD cards.

My darkroom has been used for storage during the past 10 years, since my switch to digital printing. In the office I use a quad core Mac with 16 gigs of RAM and in the field I use a 13 inch MacBook and back up my photos with 300 gig pocket drives and to an Epson P7000.

For scanning, I use a Nikon LS4000 35mm scanner guided by Lasersoft scanning software which gives me scans approaching high end drum machines. The same software controls my Epson V750 flat bed scanner which produces fantastic scans from transparencies or negatives larger than 35mm. Images are viewed on Mac 23 and 15 inch flat screen monitors. Both are calibrated with an Eye-One spectrophotometer. Prints are viewed on a Soft-View calibrated transparency/print viewer. Support equipment includes several terabytes of external drives and I cannot work without my Wacom tablet for adjusting my prints.

I am still experimenting with the best workflow and currently download from compact flash either directly to a designated folder or via PhotoMechanic. I do most of my editing and primary adjustments from Lightroom. For editing my images I use Adobe Photoshop CS4 for master quality prints.

Most of my printing is done on my Epson 3800. For large prints I have an Epson 9800 set up for mat prints. My Epson 7900 is my glossy workhorse. These printers closely match my monitor and I seldom have to print an image twice. Other printers include an Epson 1900 for correspondence and printing directly on CD's or DVD's.